For some recent reviews of events with works by AMC-represented artists, check out our Scoop noticeboard of reviews. You can help make this list more comprehensive by sending us links . You don't have to log in or create an account to see the page and follow the links to read the reviews in full.

Madeleine Flynn and Tim Humphrey's site-specific work Gauge, realised in collaboration with Graeme Leak, Rosemary Joy and Cameron Robbins, opens at Melbourne's Meat Market on 15 November. Gauge - 'a playground of investigation into weather, water and scale' is open until 21 November, and then again from 23-25 November as part of 'Going Nowhere' event. 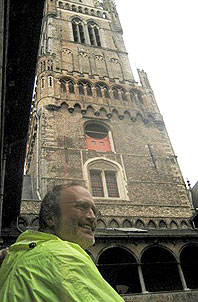 Benjamin Thorn in Bruges prior to
the performance of his carillon piece.
Photo © Charles Michels

Benjamin Thorn's and Clare Maclean's music was performed in Belgium at the beginning of November as part of the ISCM World Music Days 2012 official program. Maclean's choral work Angus dei was included in a cathedral concert in Bruges by the Flemish Radio Choir, conducted by Johan Duijck, while Thorn's carillon work Bell Play was played from the belltower in the main square of the historic city. There was also a complete performance of Matthew Shlomowitz's 'Letter Pieces' in Leuven, and his work Avant Muzak in Ghent.

Pianist Tom Vincent, who has just returned from Wangaratta where he was playing with Sam Anning and Danny Fischer, has formed a new quartet involving Vincent (piano/leader), Danny Healy (tenor/ baritone sax, bass clarinet), Leigh Barker (double bass) and Danny Fischer (drums). The group will be touring in April-May 2013. Meanwhile, Vincent will be appearing in Melbourne on 22 November with a yet different group of artists.

Syzygy Ensemble performed Annie Hsieh's Quartet: towards the beginning at the Brisbane Powerhouse as part of the Restrung Festival at the end of October, and her work Rules of Attraction (2012) for string quartet is scheduled for a performance in Taiwan on 25 November by Counterpoint Ensemble. A new work for guitar and flute will get its world premiere in a concert by Laila Engle and Ken Murray on 13 December in Melbourne (also in the program, works by Hindson, Conyngham and O'Brien).

Brisbane's Restrung festival program also included performances of Jenny Game-Lopata's chamber opera The Aqueduct. In three acts, The Aqueduct weaves together sounds from Middle Eastern musical traditions with jazz to underscore the human side of the Israel-Palestine conflict.

Aaron Kenny's new work for violin and string orchestra, Chernobyl, was premiered at the end of October by Alastair Duff-Forbes and the Bourbaki Ensemble, conducted by David Angell. The work reflects on the events that took place at the Chernobyl nuclear power plant in 1986, 'using a mixture of rhythm, harmony and haunting melody to express innocence, atomic energy, and death'.

Wendy Hiscocks has been providing live piano accompaniments at many films screenings in the UK in October and November. In October, she accompanied the silent film London 1920 by Norwegian director Hans Berge as part of the London Film Festival, as well as a screening on 30 October in Twickenham of the German expressionist silent horror film Nosferatu (1922). November dates included accompaniments to the Russian silent film Morozko (1924) by Yuri Zhelyabuzhsky in the Barbican cinema, and to Hitchcock's silent films The Pleasure Garden (1925) and Blackmail at the Inverness Film Festival.

In December, two of Andrián Pertout's works will feature in the 'Toy Piano World Summit' Rainy Days 2012, as part of the Festival de musique nouvelle in Luxembourg. One of these works was recently awarded first prize in the 'John Cage Centennial' Wolf Museum of Music and Art International Toy Piano Composition Competition in the USA. Luz meridional, Twenty-four Études for pianoforte (commissioned by Julian Burnside AO QC for performance by Michael Kieran Harvey) will receive its world premiere as part of the MONA FOMA Festival 2013 in Hobart, Tasmania. In January 2013, Pertout's Symphonie de guerre for Symphony Orchestra (1. L'assaut sur la raison, 2. Bénédiction d'un conquérant) will be performed by the Orquesta Sinfónica de Chile conducted by David del Pino Klinge as part of the XIII Festival Internacional de Música Contemporánea 2013 in Santiago, Chile.

New releases from the AMC Shop

New CDs available through the AMC Shop in the last month include:

• Multi-piano - Roger Dean 1978 to 2012 (Tall Poppies). This new release showcases Roger Dean's music over a 40-year period. It contains some of his best work since 1978 on his main instrument, the piano. The 2-CD set is part of Tall Poppies' 21st birthday celebrations. Listen to samples and buy the CD through the AMC Shop for $41.80. AMC members are entitled to a 10% discount - find out more.

• China wind - Robert Schubert plays the clarinet music of Julian Yu (Move). Clarinettist Robert Schubert has been an admirer of Julian Yu's music ever since they first met in 1996 at the Melbourne International Festival of the Arts, and has since commissioned a number of works from Yu. China Wind represents the fruits of their collaboration. Each work owes aspects of its conception to the composer's native China and to the characteristics of the featured wind instrument, the clarinet. Listen to samples and buy the CD through the AMC Shop for $26.

Soprano Jane Sheldon, harpist Genevieve Lang and the Acacia Quartet have released a CD of arrangements of mostly traditional songs from Australia, the United States, and the British Isles. Included on North + South album are Martin Wesley-Smith's Tommy Tanna, a setting of a poem published in The Bulletin in 1895, Andrew Ford's arrangement of the Northumbrian song Maa Bonny Lad, and Ann Carr-Boyd's arrangement of the Australian folk song 'Moreton Bay', as well as arrangements by Jane Sheldon herself. The album is available through theplanetcompany.com.

Daniel Rojas has released a CD of his Latin Piano Expressions, as well as others of his works, played by the composer himself - see CD details in the AMC catalogue. The recording will be available at least through Fish Fine Music QVB in Sydney.

The CD The hanging of Jean Lee is a collection of 26 songs from Andrée Greenwell's acclaimed music theatre work about the last Australian woman to be hanged, in 1951. See: CD details on the AMC website and the composer's website for purchases.

The Australian Voices has released their first album since the appointment of Gordon Hamilton as their artistic director. Titled simply Australian Voices, the album has been released by Warner Classics and is 'a wild and beautiful mix of pieces that traverse time and space, featuring didgeridoo rhythms, Facebook, Silent Night and a track inspired by Kevin Rudd's apology to the stolen generation'.

Conductor Richard Gill's memoir Give me excess of it is out from Pan Macmillan Australia. The memoir is claimed to be at once 'warm, extremely funny, highly opinionated, occasionally rude (where warranted) and always sublimely full of the love of music'. More details.

The music program of Canberra's centenary celebrations in 2013 includes a major commission from Andrew Schultz as well as music by the Canberra-based Michael Sollis, among others. Creative director Robyn Archer talks about the year-long program in a video interview on RealTime Arts. See also this interview with Andrew Schultz in The Canberra Times.

Pianist and composer Mike Nock's recent projects includes the music for a dance documentary titled Virtuosi, directed by filmmaker/choreographer Sue Healey. The film features eight New Zealand dance artists, whose international careers have taken them around the world and back again. Extracts are available on this website.

The Brodsky Quartet have added the string quartet version of Andrew Ford's Cradle Song (dedicated to the memory of Richard Pollett) to its constantly changing 'Wheel of 4 Tunes'. Designed to celebrate the Brodsky Quartet's 40th birthday, each night an audience member spins the wheel to decide which works comprise that concert's program. For an early incarnation of the wheel, see this website.

Julian Day is one of six finalists in the 'New ideas in music' composition competition by the Oregon-based Third Angle Ensemble. Each finalist will be commissioned to compose a work for the ensemble, and one overall winner will be chosen after the final round. More details.

The concert hall of the Goulburn Regional Conservatorium will be renamed the Paul Paviour Concert Hall, to honour the founding director of the conservatorium. Paviour was the director from 1985 to 1991. He is currently involved in several works commemorating the 150th birthday of Goulburn as a city, and the 100th anniversary of Canberra as the capital of Australia. Also underway is music for a film and a TV series.

After nineteen years at the helm of the Australian Art Orchestra, the ensemble's founding artistic director Paul Grabowsky has announced that he will pass on the leadership to new hands. As musical director on several projects already underway, Grabowsky will continue to be involved with and committed to the organisation. The AAO is currently seeking a new artistic director.